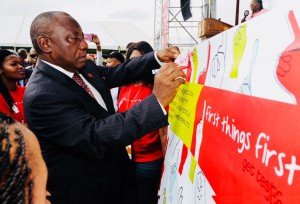 Our Host, the Premier of the Eastern Cape, Mr Phumulo Masualle,
Your Majesties and all traditional leaders present,
The Minister of Health, Dr Aaron Motsoaledi,
Ministers and senior government officials,
Board and Management of SANAC,
Vice President of the Chamber of Mines, Mr Andile Sangqu,
Social and Development Partners,
The community of OR Tambo region,
Manene nani manenekazi,

For nearly three decades – beginning on the 1st of December 1988 – people across the globe have been commemorating World AIDS Day.

Every 1st of December, we take time to affirm our collective solidarity with people living with, and affected by, HIV.

This is a day dedicated to the memory of friends and loved ones who are no longer with us because of AIDS.

It is a day on which local and global social partners dedicate their energy to raise awareness about the HIV epidemic and share plans to end it.

On a day like this one, we also pay tribute to the organisations and activists who have devoted their lives fighting for the recognition of the rights of people living with HIV.

It is a day that reminds us of the bravery of late activists like Gugu Dlamini, Nkosi Johnson and Prudence Mabele.

It brings to mind the founding President of our democracy, Nelson Mandela, uYem Yem, who fought against discrimination against people infected with HIV and TB and rallied behind the campaign for expanding ARV treatment.

It is a day where we must also pay tribute to the scientists whose work is continually improving our response to the epidemic.

Today we also pay tribute to the many health care workers, social workers and educators in hospitals, clinics, schools, orphanages and in our communities who have devoted their lives to increasing awareness about HIV transmission, prevention and treatment.

We pay tribute to all leaders in our communities, business and labour who are leading in the struggle against HIV and TB.

As respected custodians of our culture, traditional leaders have a significant influence on social attitude and behaviour.

We salute Izinkum’kani zethu for standing up with our people to build socially cohesive communities, for promoting progressive cultural practices and for taking a stand against harmful and destructive practices like ukuthwala.

Ukuthwala robs our girls of an opportunity to complete school.

They end up becoming young mothers and sometimes they are abandoned and left destitute.

Culture is supposed to build.

It is not meant to limit developmental opportunities for our children.

Our traditional leaders are standing up to say it was never part of African culture to deny our children full opportunities and freedoms to make reproductive health choices.

Amakhosi wethu are rejecting the notion that it is part of African culture to abuse women and to forcefully circumcise young boys without the knowledge and involvement of their parents.

They are calling on everyone to return to the core value of Ubuntu, which recognises and affirms the humanity and inherent dignity of all.

Today they are with us because they want their actions to count in stopping new HIV infections.

They are determined to take the lead in encouraging individuals and communities to go for HIV testing and counselling.

They have responded to the call we made last year for a national prevention revolution.

The call for a prevention revolution is a call for a fundamental change in the way we relate to each other.

It is a call that envisions a new society based on equality, non-sexism and human dignity as called for in the Freedom Charter.

It is a society where women are economically free and culturally empowered to refuse to have intercourse with men who refuse to use a condom.

It is about building a new, caring and empowering world civilisation where culture and religion does not associate the use of condoms with immoral and sinful behaviour.

It is a society in which the LGBTI community is free from stigmatisation.
Such a revolution must produce a new woman and a new man who seek empathy, compassion and understanding – not indifference, prejudice and ignorance.

This is a call to end patriarchy, sexism, poverty, unemployment and inequality, all of which increase the vulnerability of women to contracting HIV and AIDS and other sexually transmitted infections.

It is a call for us to create a new language that will allow our young people to talk about the wisdom of safe sex and the use of condoms.

It is a call to writers, poets, painters, sculptors and musicians to find the words, melodies and imagery that will make the use of condoms a part of our new identity, new culture and desired future.

Thanks to the efforts of government and all social partners, our country has the biggest HIV treatment programme in the world.

We have 4.2 million people who are in treatment.

But there is still some way to go because we have about 7.1 million people who are HIV positive.

We intend testing and treating at least 6.2 million people with HIV by 2020.

We will be introducing a new treatment combination from April next year.

It is known as Dolutegrevir and is good for patients.

The new treatment will save us money, which in turn will allow us to put more patients on treatment.

New infections are coming down, but too slowly.

In a year, we distribute more than 900 million male and 40 million female condoms.

But we need people to consistently use them as it is the most effective way of preventing HIV and unplanned pregnancies.

We are happy to report that the She Conquers Campaign which we launched on 24 June last year has taken off in 22 sub-districts.

We wish to appeal to every sector of society to take this campaign seriously to build the capacity of our girls to make responsible decisions about their lives and careers.

We call on our traditional leaders, religious leaders, civil society formations, government departments and the private sector to learn more about the campaign and to support it. 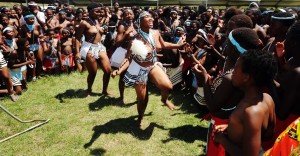 Last year more than 230,000 adolescent girls and young women in the 22 sub-districts were tested for HIV and 18,000 tested positive and were linked to care.

Without this campaign, they may never have known their status and be on treatment.

Critically, however, we as a society have to work harder to prevent these new infections.

The number of people who die from HIV and TB – although still unacceptably high – is decreasing.

Part of the reason for this decline is that we have large numbers of people on treatment.

As SANAC, we call on our development partners, like PEPFAR, to continue to support our prevention and treatment programmes as we pursue the goal of zero new HIV infections, zero discrimination, and zero AIDS-related deaths.

We know that stigma and discrimination against people living with HIV makes it a challenge for people to test for HIV and for those infected to seek treatment.

We know that the marginalisation, discrimination and persecution of vulnerable groups like sex workers and men who have sex with men only create conditions for the spread, not prevention of HIV.

We know too well that HIV thrives where women are disempowered and excluded from education, employment and economic opportunities.

The health and growth of our economy depends on the wellbeing and capabilities of our people.

To develop the economy of the country, we need people who are healthy and living productive lives.

The epidemics of HIV, TB and non-communicable disease drain the economy of its most talented people in their most productive years.

This means that all sectors of society must contribute to improvements in the health outcomes of our nation.

In this regard, we are pleased that the Chamber of Mines, which is represented here today, has pledged nearly R2 million towards the HIV and TB screening of the people of OR Tambo.

We applaud the Chamber of Mines for recognising that this district, which for many decades served as a reservoir for cheap labour for the mines, needs the investment of the private sector to advance reconstruction, development and prosperity.

We applaud the recent launch in Tshwane of the Phila Taxi Industry Campaign by the Ministers of Health and Transport and the leadership of SANTACO.

This campaign will focus on tackling HIV, TB, non-communicable disease and violence and trauma among the 15 million passengers that use taxis each day.

We call on the construction industry to take care of its workers as well as the people who service this industry, including the hawkers at construction sites.

Research shows that when we have many workers who are new to an area, they attract sex workers.

Waterberg, with its increasing mining activity, is a good example of this phenomenon.

We call on schools to start implementing the Cabinet-approved HIV and TB policy to educate both learners and educators about health, in particular HIV and the hazards of early sexual debut and unprotected sex.

To our young girls, remember the slogan: “Books before boys because boys bring babies!”

We plan to launch a national HIV, TB and non-communicable disease screening and testing campaign in February next year – to reach the most vulnerable people – people who have HIV but don’t know this and are not on treatment. 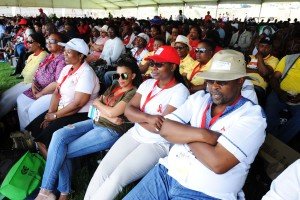 We want to reach people who have TB but don’t know they are infected and are not on treatment.

We want to reach people who have diabetes and hypertension but don’t know this and are not on treatment.

This campaign will focus on the importance of prevention.

It is also aimed at destigmatising HIV and TB.

It is informed by the overwhelming evidence that stigma is still a barrier to treatment.

This is not the time for falsehoods and myths.

Prevention works. Let us all do the right things.

Let us use condoms – and use them correctly and consistently.

Let us circumcise, test for HIV, and stop the abuse of women and members of the LGBTI community.

Visit your nearest clinic as soon as you feel unwell.

Let us encourage our boys to circumcise because research has proven beyond doubt that circumcision significantly reduces the risk of HIV infection.

The Minister of Health has a campaign called double-up, which recognises that circumcision alone does not prevent HIV.

It becomes more powerful when used with a condom.

In this regard, I would like to commend the government of KwaZulu-Natal and especially King Zwelithini for leading the biggest medical male circumcision programme in the country.

This is expected to significantly reduce the scourge of HIV in that province.

We acknowledge that here in the Eastern Cape and in Mpumalanga medical male circumcision is being carefully rolled-out.

We are encouraged that traditional leaders are looking into this matter, providing guidance so that the introduction of medical male circumcision does not undermine our cultures and traditions.

In this regard government would like to strengthen our partnership with traditional leaders to ensure that no boy or young man gets injured or dies from circumcision.

Once more, we wish to extend our profound sense of appreciation to all the individuals and organisations who are daily contributing to ensure that we can eliminate HIV and TB as public health threats by 2030.

And we pay tribute to our Kings, Queens and other traditional leaders for taking up the challenge to deepen and accelerate the prevention revolution.