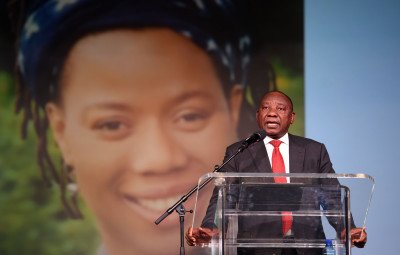 Today we are gathered in sadness.

Our thoughts and prayers are with the Mabele family.

We hope that in your bereavement, you can draw comfort and strength from the many people, in this country and beyond, who offer you their gratitude for producing such an extraordinary human being.

As we struggle to come to terms with the deep pain of her passing, we celebrate a life that made such a profound difference in the lives of so many.

We celebrate the life of a person who – through her activism, her passion, her commitment, her compassion, her defiance – has left an indelible mark on all of us.

Prudence’s courageous life journey, the campaigns she fought, the causes she championed, echoed the historic march by 20,000 women to the Union Buildings in 1956.

Prudence was a modern-day iteration of the fearlessness, steadfast conviction and selfless activism that drove Sophie de Bruyn, Lilian Ngoyi, Helen Joseph, Rahima Moosa and so many other notable women to the very bastion of the apartheid regime.

Like those who marched on the Union Buildings, she did not see the struggle that she had to fight in one dimension.

It was not a fight simply for the rights of people living with HIV.

It was a fight to affirm the rights, dignity and well-being of every person who suffered discrimination, oppression, stigmatisation and exploitation.

Her very being reflected the many dimensions of human endeavour.

She was a humanist, a comrade, an activist, a leader, a manager and a sangoma.

None of these trumped the other.

She was a multi-faceted individual who shouted and marched and challenged authority and later went home to the silent sacred space of the ancestors where she meditated and connected with the spirits.

It is fair to say that when HIV struck the 18-year-old Prudence Mabele, it struck a rock.

Prudence decided not to hide her status, becoming one of the very first South African women to publicly acknowledge her HIV status.

In doing so, she felt the full force of stigma.

She had to change her course of study from medical technology because the institution, Peninsula Technikon, feared that she may infect other students in the laboratory.

Her hospital file was stamped with a big red X and nurses who treated her asked her if she was a sex worker.

Yet, despite the daily attacks on her dignity, despite the bouts of despair and disillusionment, she had the resilience and the fortitude to form the Positive Women’s Network at Garankuwa Hospital.

In those early years of our democracy, as many activists pursued a quieter life after the exertions of our liberation struggle, Prudence bravely opened new frontiers of struggle.

Prudence was among those AIDS activists who were essentially fighting a struggle to be human, to be remembered into the human race, as worthy normal individuals with a manageable condition.

She brought comfort to those she knew were pained by physical discomfort, social stigma and the violation of their fundamental human rights.

Prudence never stood back from speaking truth to power.

She never stopped questioning and confronting those whom she believed were neglecting their own duty to society.

She spoke her mind to shape other minds and build networks of activism and support that changed thousands, if not millions, of lives.

While many marvelled at our achievements in putting millions of people on antiretroviral treatment, as many declared the battle nearly won, Prudence did not give up the struggle.

Just two months ago, we were honoured to have Prudence join us in the public gallery of the National Assembly for the presentation of the Budget Vote of The Presidency.

It was an opportunity to present Prudence and a group of remarkable young women to Parliament to illustrate the depth of talent and commitment that underlies social transformation in our country.

It is our hope that many young women – and indeed young men – will follow Prudence’s example.

We need young people who are passionate, committed and deeply care about the welfare of others.

We need young people who will stand up for the rights and dignity for the most vulnerable and marginalised.

We need young people with the courage to challenge complacency, incompetence, arrogance and corruption.

Importantly, we need young people who will organise, mobilise, conscientise and build.

South Africa has lost a true fighter, an activist, fearless and passionate.

She believed in resolving issues through dialogue and continued to bring all sectors of civil society together in all her efforts.

She was not intimidated by science because she experienced many of the things scientists write about and was therefore the best advocate.

She lived her life unapologetically and had strong views about the actual experience of living with HIV.

In the end, Prudence outlived AIDS.

She epitomised hope and life at a time of death and despair.

Today, we bid Prudence farewell and allow her to take leave of every banner, every poster, every march, every argument, every home visit, every podium and every loss of a comrade that marked her own life.

Your time to rest has finally come, Prudence.

Leave the struggle to us.

Let us learn from your life how to shape a better future in your absence.

You have earned your place in history.

But most importantly, you have made your home in our hearts.