The aim of this meeting was to rally the legal fraternity behind the recently launched South Africa’s Human Rights Plan. This Plan is a response to human rights and gender-related barriers to HIV and TB services, especially for key and vulnerable populations such as LGBTI+ populations, sex workers men who have sex with men (MSMs) and young women and girls. It will focus on eliminating the stigma and discrimination associated with the mentioned health and social challenges in accordance with Goal 5 of the current National Strategic Plan for HIV, TB & STIs: 2017-2022. The said Goal seeks to ground the response to HIV, TB & STIs in human rights principles.

The plan is the response by government, the private sector and civil society to human rights and gender-related barriers to sexually transmitted infections (STIs), human immunodeficiency virus (HIV) and tuberculosis (TB) services.

SANAC CEO, Dr Sandile Buthelezi opened the discussion by unpacking the state of HIV in the country and explained that despite some challenges, the country has made significant inroads in controlling the spread of HIV. He said the country had decreased new HIV infections.

“The HIV prevalence rate is increasing whereas the incidence rate is decreasing. This means those infected with HIV are enjoying longer, healthier lives thanks to the provision of life-saving antiretroviral therapy,” said Dr Buthelezi.

Retired Constitutional Court Judge, Edwin Cameron was one of the panellist during the engagement. He spoke passionately saying HIV taught him three lessons – (i) everyone is at risk (ii) solidarity is important, and (iii) the poorest continue to be most vulnerable.

Also on the speakers list was a young lad, Krevasen Kanniappen, who gave a personal account of his struggle with substance abuse (specifically heroin). He is now reformed and is a Peer Coordinator for Community Orientated Substance Programme (Cosup). He pleaded for assistance for drug users saying, “The lived realities of many people on the street is that they are faceless. Nobody sees them and this needs to change.”

The Deputy Minister of the Department of Justice & Constitutional Development, Hon. John Jeffrey delivered the keynote address in his capacity as the Co-Chairperson of the SANAC Legal & Human Rights Technical Task Team. He began his speech by echoing the SANAC CEO’s sentiments by saying the country had made significant progress in reducing new HIV infections AIDS-related deaths. “But there’s still a significant gap in our response. Key and vulnerable populations such as sex workers, young women and girls, drug users, transgender people, prisoners, the LGBTI people are still at a higher risk of HIV infection,” said Deputy Minister Jeffrey.

Hon. Jeffrey also added that the country is currently observing Human Rights Month under the theme, “The year of unity, socio-economic renewal and nation building”. He said this an opportune time to engage with the legal fraternity in an effort to rally them behind South Africa’s Human Rights Plan.

The event’s programme director was the SANAC Civil Society Chairperson, Steve Letsike, who made a plea during her closing remarks:

“These country Plans should drive the country towards the provision of proper health care and treatment, especially to key and vulnerable populations. We urge the legal fraternity to be involved in our efforts,” said Letsike. 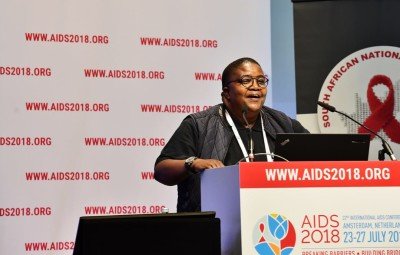 Satellite on HIV and Key Populations in Africa – AIDS2018 Conference