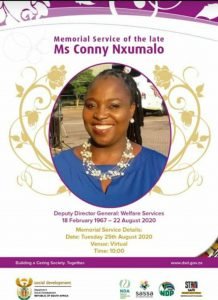 The South African National AIDS Council (SANAC) mourns the passing of Conny Nxumalo, the Deputy Director-General for Welfare Services at the National Department of Social Development (DSD) who succumbed to complications emanating from the novel corona virus.

Ms. Nxumalo was a passionate social scientist who spearheaded collaborative projects between SANAC and DSD. Her death is not only a great loss to her family but to the field of social work and HIV response. She was a devoted social worker who championed a wide range of innovative programmes geared towards the protection of women, children, older persons and people with disabilities. She was affectionately known as Sis’ Conny or ‘South Africa’s Chief Social Worker’, which bears testament to the devotion she had for social justice and welfare of all South Africans, especially vulnerable people.

“Sis’ Conny’s passing hits harder to the SANAC family since she was instrumental in facilitating the partnership SANAC has with DSD. Joint projects between the two entities were oversaw by her on the side of the Department. Her leadership, wisdom and dedication was unparalleled. She has left a void too difficult to fathom,” said SANAC Acting CEO, Coceka Nogoduka.

Ms. Nxumalo joined DSD in 2003 as a Director Substance Abuse Programme focusing on policy development, legislation, program monitoring and implementation in the area of substance abuse. She is qualified social worker with a Master’s Degree from Wits University. She leaves behind three daughters.

May her soul rest in eternal peace.