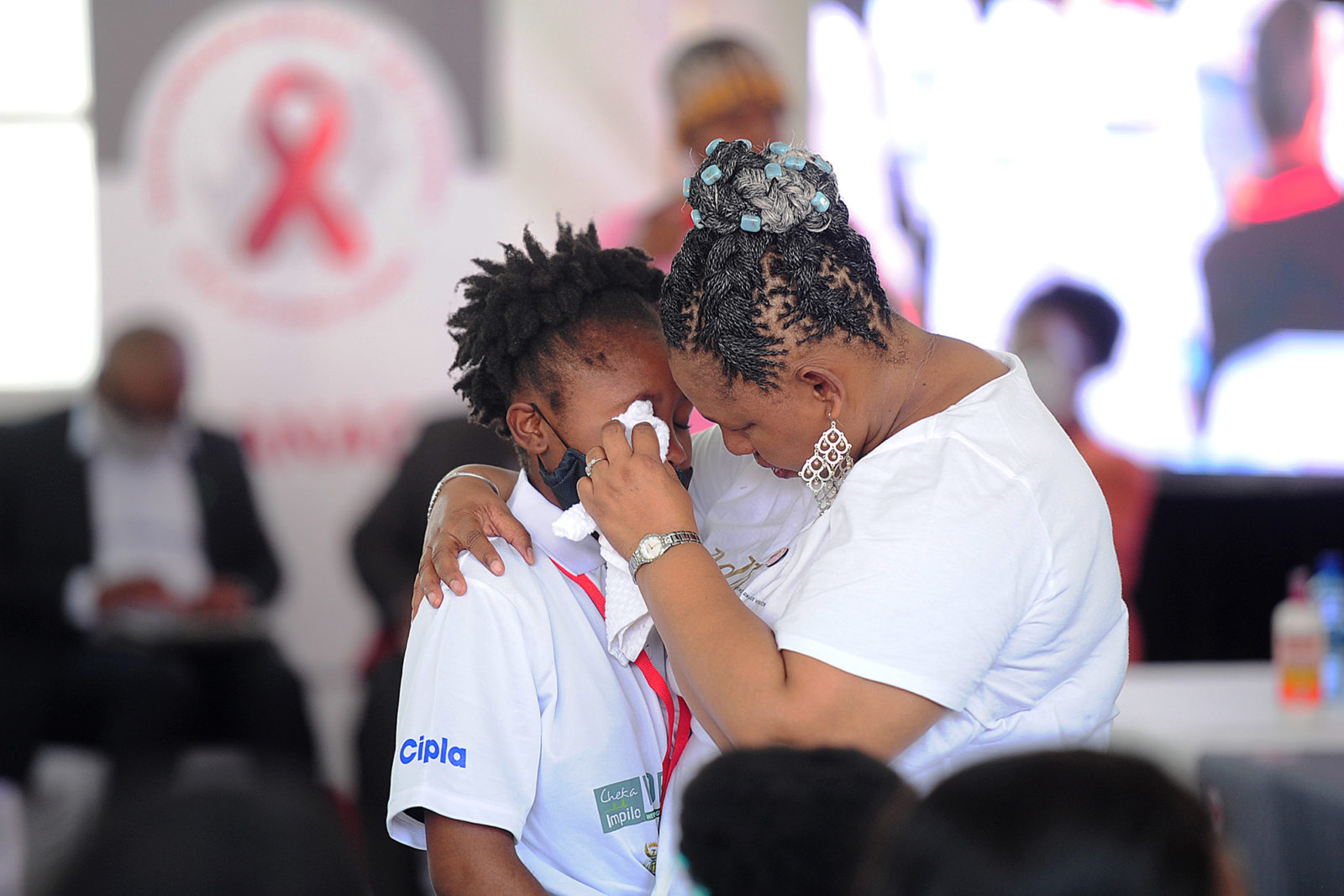 On Tuesday 1 December Deputy President David Mabuza publicly offered to “become a father” to a young woman who spoke about her burden of being a rape survivor and living with HIV.

Mabuza was part of a high-level government team that visited Soweto for World Aids Day commemorations that included a community dialogue session at the Itireleng Clinic in Dobsonville. The young woman, who identified herself as Abigail, was part of a group of young adults who shared their stories of living with HIV.

Abigail choked up as she talked about being raped when she was six years old.

Others talked about not knowing their fathers, about discrimination from their peers, their communities and especially by staff at clinics. They said they feel judged for their lifestyle choices and are often not given any privacy at clinics where HIV patients are routinely separated from general patients with colour coding or separate queues.

In his response, Mabuza said he wanted to “help nurse the wounds” by becoming a father to one of the young women at the gathering. After commending them on their courage, positivity and outspokenness, he said: “From today you are my daughter, Abigail. You will have my cellphone number and you can call me every morning if you want. The food that I eat with my children is the food that you will eat; you are now also part of my family.”

Abigail responded to Mabuza’s surprise remarks and offer with shock and tears. She declined to comment when Spotlight approached her.

Mabuza also spoke about Gauteng Premier David Makhura’s commitment to visit the not-for-profit organisation Tholulwazi Phakathi, an organisation that gives psycho-social support to teens and young adults born with or living with HIV.

Makhura, who also attended the World Aids Day commemoration, said he would visit the organisation in the next few months after the founder of the initiative, Nonhlanhla Mazaleni, told the gathering about their challenges.

She highlighted a lack of counselling resources, a growing incidence of abandoned babies born with HIV and the unresolved dilemma of how to support older teens and young adults with HIV who at the age of 18 no longer qualify for government’s child support social services, but are not resourced or equipped to fend for themselves.

The deputy president insisted that Makhura’s visit take place before the end of the year. He said he would also be part of the visit so that he “can see for myself and see how we can support them better”.

Mabuza, who is also chairperson of the South African National Aids Council (SANAC), said he had gained a lot of insight hearing from the youth.

“You have spoken about how you feel about things that are difficult to say. That is a painful journey, but now we all know.” He acknowledged that the government “can do better” and drew attention to the parallel epidemic of gender-based violence, which he said is adding to HIV infection among teens and young women, continuing on a worrying upward trend.

In South Africa, there are 7.6 million people known to be living with HIV and about five million who are on treatment. Helping the remaining people to start treatment and making it easier for people already on treatment to stay on treatment, remains a challenge.

The deputy president also encouraged young people whose lives have been interrupted by HIV to go back to school, to build their skills and to “stay the course and stay strong”.

Minister of Health Dr Zweli Mkhize, who was also part of the government team in Soweto, committed to fixing the lingering problem of bad attitudes among clinic staff.

Mkhize acknowledged that unprofessional conduct and a lack of empathy impacted on things such as long clinic waiting times, lost patient files, higher rates of people lost to treatment and people’s reluctance to seek help for reproductive health services.

Illustrating his point, Mkhize told the story of the youngest mother he has helped to deliver her baby.

“She was a 13-year-old girl who needed a Caesarean section and on the theatre table she said to me ‘my tummy is sore’ – she had no idea she was carrying a baby and that she was in labour,” Mkhize said of how the lack of education and services fail the most vulnerable.

Mkhize and Mabuza also said they had met with Treatment Action Campaign (TAC) members the night before World Aids Day. Both lauded the role of civil society and activists in keeping up the pressure and building partnerships to ensure that people do not fall through the cracks and that the programme towards an HIV-free generation remains on track.

TAC chairperson Sibongile Tshabalala said that while the government was making the right noises at the dialogue session “and setting a good example in ‘adopting’ Abigail – every minister should be doing something like that because we don’t need more talk and we don’t need them to do things that are just for show”.

Tshabalala, in her address, said South Africa’s response to Covid-19 over the past few months should be a reminder that government cannot drop the ball on existing public health crises like HIV/Aids and the even bigger burden of TB. The other lesson from Covid, she said, was that government can and must respond faster and with more resources and seriousness in tackling HIV and TB.

Benefit of the doubt

For Thulina Moukangwe (27) government is not off the hook merely because of platitudes on World Aids Day.

Moukangwe, who is living openly with HIV, said it has taken her five years to get to this point to have peace with her diagnosis. But she said 10 years ago the lack of comprehensive support and professional care hit her hard.

“I was diagnosed when I was 17. I remember that I was at the clinic in Tsakane and I was humiliated by the staff, who said I was sleeping around; meantime, I got HIV because I was raped. It took me five years before I went back to the clinic to start treatment. That was 2015.

“For now, I will give this government team who made promises today the benefit of the doubt, but we want things to improve.

“We also need to stop having meetings and dialogues with the same people. The people who should be here are the traditional leaders, the sangomas and the pastors because they need to be educated. You still hear pastors who say they will pray away your HIV; it’s a problem,” she said.

But for *Khozi, a 21-year-old Soweto local born with HIV and who became disabled in 2019 in a car crash, the weight of stigmatisation is still too much to bear. She says she has not received proper counselling and without the support, it is too difficult for her to be publicly identified as someone living with HIV.

“I’m not getting the right kind of care at the clinic at Bara. They just give me my ARVs. That’s all. They don’t help me with my disability and I don’t get any counselling,” she said.

Khozi raised her issues with the government delegation in the dialogue session, but she said: “I am disappointed with them. I feel like I had the guts to speak out today, but they didn’t have the guts to give me an answer or a solution to my problem.” DM/MC

*Khozi is not her real name.

NOTE: The Treatment Action Campaign (TAC) is mentioned in this article. Spotlight is published by SECTION27 and the TAC, but is editorially independent, an independence that the editors guard jealously. Spotlight is a member of the South African Press Council.

This article was produced by Spotlight – health journalism in the public interest. Sign up for our newsletter.

THIS ARTICLE WAS WRITTEN BY UFRIEDA HO AND PUBLISHED ON THE DAILY MAVERICK, PLEASE SEE IT HERE: https://bit.ly/2JBoZe1