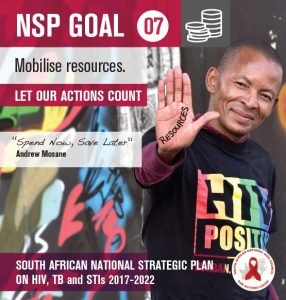 He had an infectious smile, he was loud, he was an activist par excellence. He is no more, gone to rest. He has played his part in this earth in the fight for access to HIV and TB treatment. In his words, in him you saw all the SANAC CSF Sectors because he embodied them. When all is said and done, Andrew Mosane was a humanist. We have lost a gallant fighter, an educator, an activist, a friend.

Steve Letsike, Chairperson of SANAC CSF and Co-Chairperson of SANAC says of Andrew Mosane “He made his presence felt. His contributions were incisive. He was a dependable activist ready and able to champion the cause of People Living with HIV and TB and he carried all sectors with him. He was an educator-par-excellence. Tsela tshweu Druza, until we meet again”

A virtual memorial service is planned for the 19th of January 2021, with the Mosane family for the late Andrew Mosane, a cherished friend, colleague and global activist for people living with HIV and TB.  Details are as follows:

The Memorial service will also be on Zoom and Facebook.